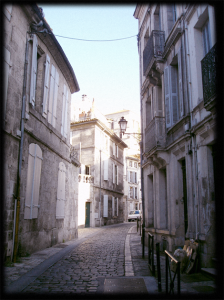 As some of you might know, during the Annecy animation festival I got myself a great gig at animation studio “2 minutes” in the capital of “Bande dessinées”: Angoulême.

Angoulême is a gorgeous historic town, ideally located between Paris and the basque country, not too far from the seaside resort of also gorgeous La Rochelle and Royan. Angoulême is a fortified town with cobbled street located on top of the “Plateau”, a huge hill overlooking the Charente river.

All the houses are made of white stone which gives it that historic middle-age feeling.

Angoulême is called the “Bande dessinée” capital because it hosts the world famous “Bande dessinée” festival every year around the month of february, and also what is probably the only Comics museum in the world. 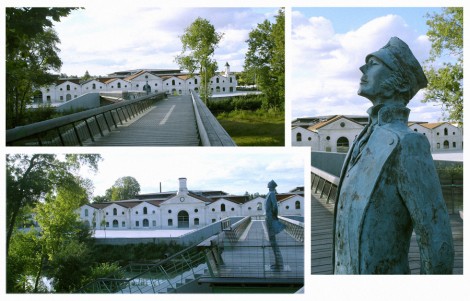 Corto Maltese in front of the Comics museum

The “Maison des Auteurs” is one more institution that makes Angouleme very unique, a period house housing 21 Comics artist for a period of one year. I got to meet one of them, Lorenzo Chiavini, an italian ex Disney comic artist now working on his own projects. The european production of the Disney comics is done in Italy by the way. Topolino is far behind him now but he still managed to get me really excited about his old work and on his advice I started copying some of the drawings in order to get better at posing, staging, inking, all those things that create appeal in comics and animation. (I also modeled a vehicle based on one of Donal “Double” Duck story and will post it in few days) 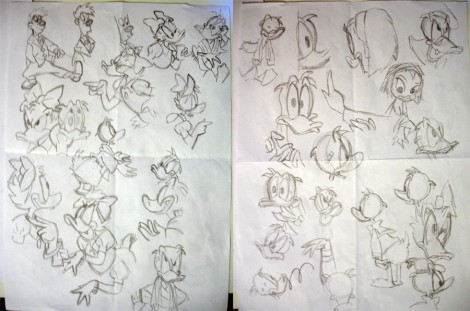 Animation wise, the town is also very unique as several companies operate there, working mainly on TV series: 2minutes, Spirit, Prima linea (the people behind “The man in the blue Gordini”, Moonscoop/Antefilms (“Bunny Maloney”,“Titeuf”), 2d3d animation studio (“Rocket Joe”), Once upon a toon. With so many companies around, and the “Intermittent du spectacle” status helping, most 3d animators follow the different productions and move from company to company provided they know all the 3d softwares, XSI for Antefilms, Maya for 2minutes and 3ds for 2d3d and Spirit (Character studio). There is also a traditional and CG animation school EMCA/EMC, which people might know from the funny short film “Le Café”.

So what was I doing in Angoulême except Kayaking on the Charente river? ;-)

EMCA animation school and our studio behind

Paper Museum, on my way to work

Well I worked for a coproduction between 2minutes and Paris studio “Intervalists” and under the direction of Cedric Babouche. Chico Chica Boumba is the name of the pilot I worked on. Here is a teaser that had been done before we started production. The final product is a bit different but that video still gives a good idea of what this is about.

The great thing about that project is that I got to do a bit of modeling since we didn’t get a modeler soon enough to do the blend shapes and teeth for some of the characters but the best thing was to work with 3 great animators who had all been working on Mac Guff’s “Pat and Stan” TV Series and one of them, supinfocom graduate Chloe, was even the animation supervisor on “Pat and Stan” but also on a 2d TV serie “la Fee coquilette” with Joan.

Working with those guys was humbling but really inspiring. They were having so much fun creating smear frames, squash/strech and funky inbetweens that I kept staring at their screens.

By the end of the production I did learn a hell of a lot about cartoony animation and did some really cool shots, too bad we didn’t have more shots to animate.

The production went fairly well for a Pilot, everybody was really pleased with the result. If things work out, 2minutes should be starting production in 5 or 6 month. In the meantime I am back to my showreel and sending CVs around.

I was really tempted to stay in Angouleme but the only production going on at the moment is at Spirit on Character Studio. I did approach them but after one evening doing an animation test I decided it wasn’t worth spending time learning CS and I would intead work on my showreel. I understand why people used CS 5 years ago in games but for TV series I don’t see the point anymore and I do wonder how they manage to still find experienced animators. If only they used regular Euler based rigs like Illion on “Planet 51”….. Joan kept telling me that CS is very fast for TV series but I still think it is very limiting in term of rigs and makes it difficult for people to transfer from XSI or Maya to Max.

4 Responses to “Back from Angouleme”