Posted on October 31, 2009  Leave a Comment
Filed under Character design 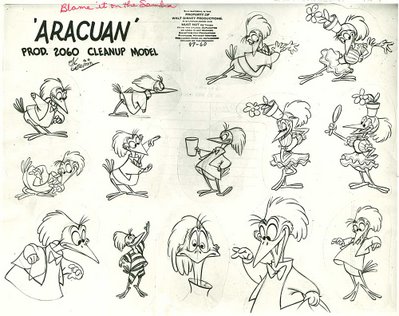 His post made me realise that there are potentially two approaches to character design:
[…]

1. From the Character to the Design

I think it is much easier to think about the story, then study how the characters contrast from each other or how their attitude changes during the story (character arc). This approach allows you to “quickly” elaborate a design without wasting time creating huge variations. This is possibly the prevalent approach in feature animation and the designs in UP are the perfect example.
Old Square Grouchy Carl vs Well rounded Russell.

That approach is great and allows for simplicity but you might come up with Clichés.

When I read that Mark chose his heavy vulture to be the slow, dim-witted character of the trio and immediately thought this was an easy choice. Haven’t we seen that too many times? “Chunk” from the Goonies would be one of the many fat dim witted characters I could come up with. What about a clever fat character instead?

2. From the Design to the Character

In contrast, when starting from the design, I think it is easier to create stronger and more elaborate designs. This approach could be the one used by the UPA style artists back in the 50s or even closer to us, Craig Kellman when creating the character designs for Madagascar. You first think about a general design, come up with a paradigm and have your character fit to that idea.

Well that’s it for now. I will get back to that post one day. In the meantime, I hope you found this useful. Go ahead and post some comments if you think I am talking nonsense or if you would like to add something.