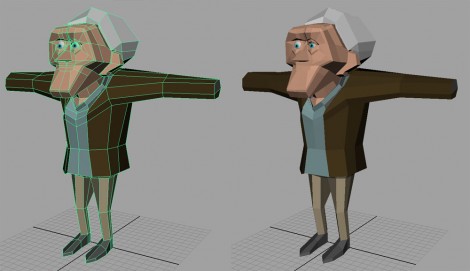 As some of you might know, I have decided to make a tutorial showing how to use the zooTools and SuperCrumbly’s abAutorig autorig scripts.

To demonstrate this I wanted to model a new character so here it is!

Charles Muntz is definitely my favourite character design from the movie UP.

I have mainly focused on the right hand side and will mirror it next time. 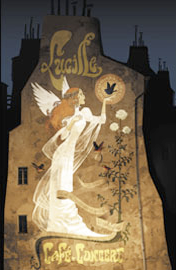 Posted on February 8, 2010
Filed Under Friends | Leave a Comment

My friend Jay posted has a very fancy car but that’s not what this is about today ;-)

I am not too sure how he does it exactly but that’s really cool. I wonder how this would work with animation….. 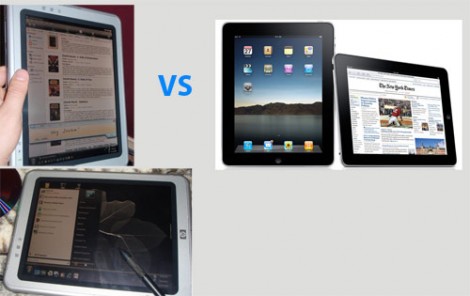 Which one of those:

– supports Adobe Flash out of the box
– allows you to listen to music while doing other tasks
– allows you to run hundeds of professional applications
– has up to 1.2ghz processor
– has more than 50 gb hard drive
– allows you to draw with a real pressure sensitive pen (Wacom board)
– doesn’t force you to buy an expensive Apple computer to develop applications
– comes with a free docking bay with keyboard
– costs less than $200 on Ebay
– came out 6 years ago (released in 2003)
– is actually a real computer

Fresh and not so fresh ideas

Last year I had an interesting conversation with Cedric Villain from french animation forum “Fousdanim.org“.

As a 2008 Annecy short film award winner, he was invited to participate in the selection of the 2009 Annecy nominees and went through 50 hours of program. After such an experience, he confirmed that the same topics or even stories kept coming back.

The reason I want to talk about this today is because my friend Joost posted a very very cool short film which really stood out aesthetically for me but not so much in term of story. Without further due here “Pivot”

Because I have been into design in motion for quite a while, I immediately thought about the Psyop arrows from the Lugz campaign which in 2002 led to the …. the “arrow craze”…. Every motion design video had to have its variation at that time and even I came up with my own flavour. The Robot on my modeling showreel was supposed to fire them in an explosion of colours ala DeBlob. 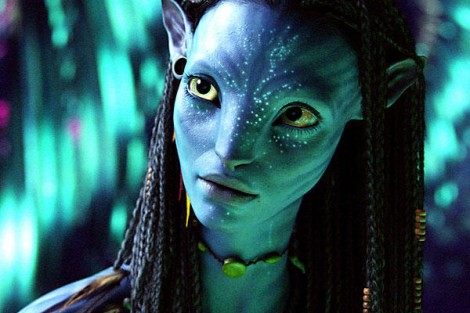 Avatar’s producer Jon Landau made a very interesting comments some time ago and a lot of people failed to understand what he was talking about.

Here is an extract from the article published in the Australian http://www.theaustralian.com.au/news/arts/titanic-director-james-cameron-grabs-films-holy-grail-in-new-film-avatar/story-e6frg8pf-1225766563195

“A great actor withholds information. Dustin Hoffman in All the President’s Men can sit there and do nothing. No animator would ever allow that, they would put in a twitch. So our objective was to preserve Sam Worthington’s performance and have that be what you see in those characters.”

As animator we find it difficult to keep our characters completly still. Because we get paid to animate and because we love to see animated things we feel compelled to add twich, eye darts, shoulder raise. Top Disney animator Mark Hen made a similar comment in one of the Animation Mentor lectures and more recently the good people from the “Speaking of animation”.

The reason I am bringing this topic today is because I found a very cool clip that will illustrate something very similar.

The modelling industry has very specialised professionals called “Body parts models”. Don’t believe me? Hit the link (http://www.bodypartsmodels.com/home.html). Those people get hired for photo-shoots mainly when nice looking hands, arms, shoulders, bums …. are required. They are obviously cheaper than full body models but do the trick for close ups. Now the problem is that very often those “body part models”, similarly to animators, just… just overdo it! Instead of “straight acting” their part, and just display what they are supposed to display, they feel compelled to “hit the pose” and come up with the most over-the-top gesture or poses that will justify their pay check.

Now I have a very cool clip where you can see one of those models illustrating this perfectly. Pay attention, well, how could you not pay attention to the silly hand gestures of the woman holding the Emmy award on the right hand side. It is so over the top that Ellen DeGeneres can’t help mimicking her towards the end of the clip.

Posted on February 2, 2010
Filed Under Drawings, Portfolio | Leave a Comment

I tried to think about the composition a bit more this time. The thumbnails on the top left corner are the base for my composition.

I wasn’t too happy the way things were going for the first one and restarted from scratch, which didn’t leave me with enough time to finish the pose. I had in mind to incorporate the little platform the model was standing on originally but realised that it didn’t present much interest so I decided to go for something tighter, with the feet fading away.

The second one is pretty good, but the model is way to high on the page. The foot is better than my last attempt but the hands, especially the right one would have needed more work. The quality of the line is still very poor but I am working on that.

Things are getting better and better I feel and there is definitely some improvements compared my first drawings. My skills in drawing from imagination have also dramatically improved and I can now draw different body parts without reference.

Those two drawing will probably be my last pencil shaded piece as I feel it is now time to move to Oil painting. I have been told that moving to paint would help me to improve my drawing skills and Painting is also something I always wanted to try but never found a good teacher/course until now. 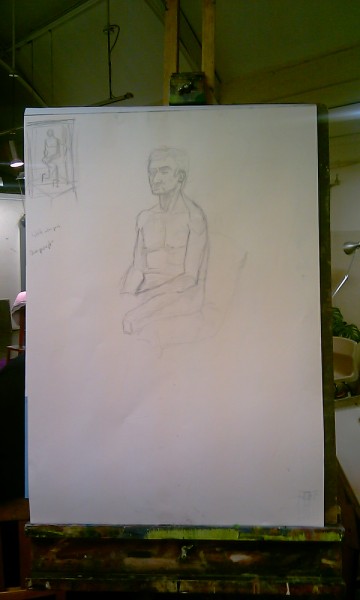 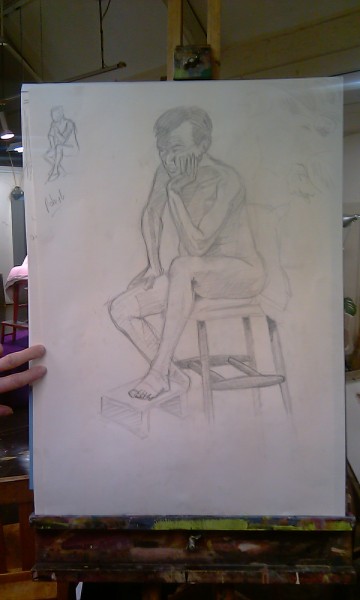