Posted on May 3, 2010  9 Comments
Filed under Animation, Portfolio

– Character with physical limitation:
I have gone to a Michael Checkhov acting workshop few years ago and this could have been an excellent exercise to try some of the techniques I was taught. Animating a character with a 40 inches nose is something I would really like to do one day but maybe not just for a walk with character.

– 8 years old kid:
Come on, UP only came out few month ago! The work they did on Carl kid and Russel was way to entertaining to try to compete with them. The opening shot with Carl running around as an explorer at the begining of the movie is still one of my favourite shots. That sequence alone was already worth twice the price of my theatre ticket.

– Confident character from the early 1970’s
I have no clue what they are referring to, I wasn’t even born in the 70s! *cough*. More seriously what did they have in mind? I thought about famous characters from movies, Rambo?, TV series, “Starky and Hutch” or “Chips” but relying on TV and popular culture is surely the best way to fall into generic animation and doing exactly what other people will do and I have already seen several animated version of the two TV series mentionned earlier so I don’t want something that looks similar.

– Victorian Era:
Hoping to apply for Bibo’s “Monstre à Paris” (“a Monster in Paris”) in the past, I had already done a bit of research on the 1900’s and I thought it would be good to stick with what I already had but I am not to sure what was implied by the “do your homework, many to choose from”. Do they actually mean that we have to imitate an historical or fictitious character from movie/novel?

Well I had an acting idea I wanted to animate so I went for my own character.

I like the idea very much as it shows a “change of gear” and this could lead to crazy breakdowns if I go for cartoony style.

Story
Now this is a fun idea but there isn’t much acting going on so let’s do a bit of reverse engineering and think about a story:

Who is the character? Where is he coming from? Where is he going (destination)? Why does he fall? And to echo a roundtable with Pete Docter, why do I care? Why am I invested in that?

I could have spent days trying to come up with answers but with the amount of time left I went for something pretty simple that would still allow me to deliver my original idea.

He is a young chap, 16 to 18 years old. He is on his way to meet other single young adult males at a “Casino” (very popular form of entertainment in those days), he passes by an old lady neighbour accompanied by her very attractive daughter, he turns around and waves with his hat while walking but steps onto his walking stick, stumbles, recovers his balance and walks out ashamed of his poor performance.

References:
The Victorian era is the period under the reign of Queen Victoria, from 1837 to 1901 so in term of visual references, between Roman Polanski (1837) “Oliver Twist” and Disney’s (1910) “Marry Poppins”. Perfect references I already had where the previous movies mentionned and also Tim Burton’s “Corpse Bride” and (1855), “Gangs of New York” and specifically Tarzan (1914) since Ken Duncan during an interview for the Animation Podcast spoke about how the type of clothing can influence the way you move (not sure I have enough knowledge on Victorian clothing for that though).

Props:
From what I understand, 16 to 18 years old was pretty much considered as adult in those days and they would probably already dress as older males.

For the props, I could have gone for a walking cane since they were very popular but following early advice I am going to switch to a walking stick.

The character will be customized mainly using Wrap deformers for the eyebrows, hair, suit. Those will take a bit of time to do and are not really relevant until the very final pass so the character will only be wearing his hat and stick for a start.

Roughing out the layout:

Here is an early layout/blocking pass of the begining that was already enough to trigger comments and changes: 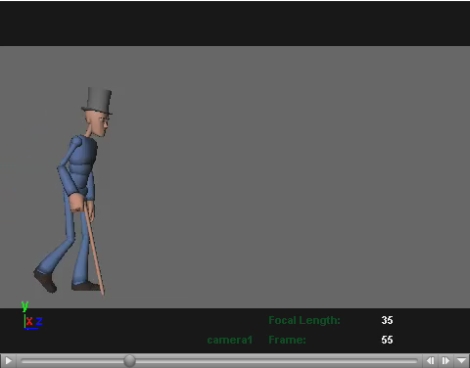 This already raised some questions:
– Would the character be appealing enough at the begining of the shot or should I add more character and maybe change his destination? Should he be coming FROM the Casino or Pub?
– Would the “gear change” show enough contrast? I like contrast but I am not a fan of over animated shots unless it is required by the style so ….
– What animation style should I choose? I love cartoony animation but Pixar animators tend to prefer more subtle, realistic shots

– what about if he was an old guy? 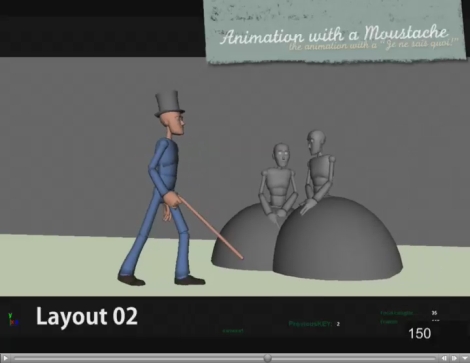 Ok this is only a layout but I already started working on the idea that he could be an old guy to make a bigger contrast but the idea of a young guy coming back from the Pub is still in the back of my mind.

The stumble/recover sequence is obviously missing.

So far I just worked out two steps, cycled them using the infinity function in the graph editor, baked all the channels every 3 frames and tweaked the different sequences. I refined Norman geometry slightly, nothing major, his arms still need a bit more bulk. I am still unsure about the length of the cane.

This is raising some new questions:

I think the camera is working fine, but we are completely missing the idea that the action is taking place in the Victorian era….. If it weren’t for the props and later the environment, this could probably take place in the 21st century…. Hum how could we get this back? Do we actually need to get this in or was it just a guideline so people could do a shot that had a bit more appeal in term of design rather than animation? Any idea?

Should I speed up the walk in places to add a bit of texture and how should I go about that without animating on subframe? Maybe I could scale all the keys once I am on ones, making sure I am not snapping to frames?

Tuesday
Well I had to stay at work a bit longer to render some marketing material for E3 which didn’t leave me with much free time.

Anyway, I blocked the hat waving sequence tonight but a discussion I had at lunch with my colleagues made me realize that the character didn’t have much ….. character.

The original premise was that the guy would be going to a fairly generic location and therefore in a fairly generic manner. Pretty boring isn’t it? What about if the guy was carrying something very heavy that he had to bring somewhere? What about if he had some balloons in his hand? This lead to a lot of thinking and the desire to change the original idea completely and to use a well known British Victorian character. Crazy hey? Well I will at least finish the blocking of that shot then move on to the new idea.

In the meantime, first half blocking 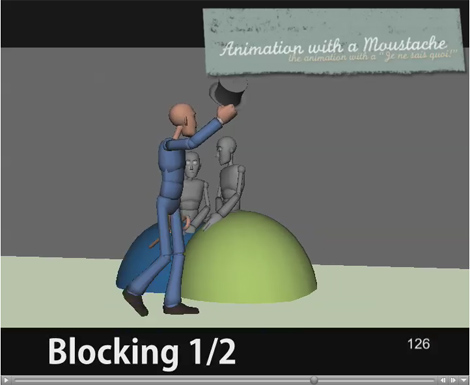 [update]
well I have decided to go for something a bit different this week end. Not sure I am gonna scrap the original idea but here is what I did this week end. Hopefully this will immediately come across as “entertaining”. 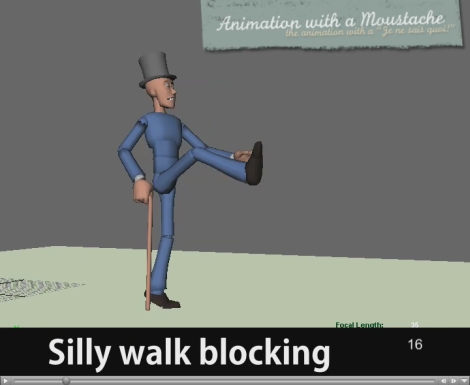 [Monday update]
As I implied few days ago, I don’t think that shot has much entertainment value but I will stick with it since there is no time to change the idea entirely.

Here is the full blocking. The hat waving motion is a bit too slow but I will fix that in the next pass, probably in spline. 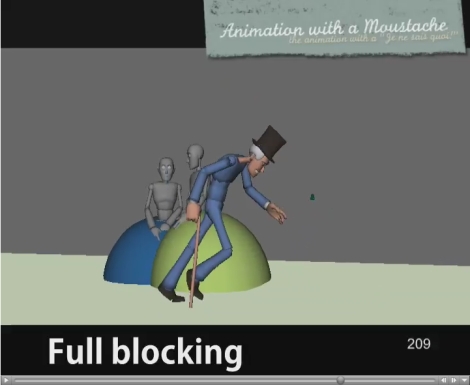 9 Responses to “The Walk Challenge – A contest”