Definitely the last post before I start working on my assignment :-|

There is a concept I never completly grasped about video shooting, it is called Video Interlacing but don’t be scared, video interlacing? It is actually very simple.

If you look carefully on frame 163 of my last Video ref, you will see this: 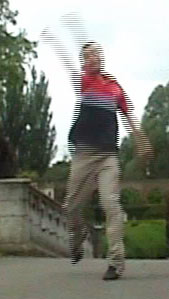 When shooting video with any consumer camcorder this is what actually get printed on your tape so why is that?

To simplify, a PAL TV doesn’t display 25 fps but actually 50 fps. Have you ever heard of 50Hz TV? Now those 50 fps are not full frames, they are interlaced frames. The reason is because of the technology used. The tube of a TV in the past wasn’t able to display full frames so this was the trick used: displaying the odd lines on the first pass and the even lines on the second pass. (beware the order depends on the hardware).

On a fast movement like above, since one line out of two is captured 1/50th of a second later, then that second field will appear delayed.

If your footage is gonna be displayed straight onto your TV then you should just leave it as it is, the movement will appear very fluid.

Now the problem is when you want to do some compositing. Since each full frame is interlaced, an effect like a blur or adding adding a layer of CG will corrupt your interlacing.

In a video compositing/editing software what people do to avoid working on interlaced frames is to tell the software which field to use first. Here is the result you would get in Combustion: 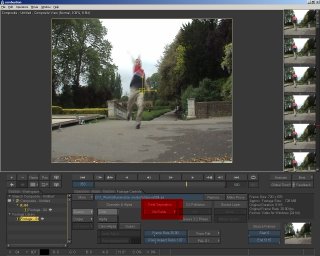 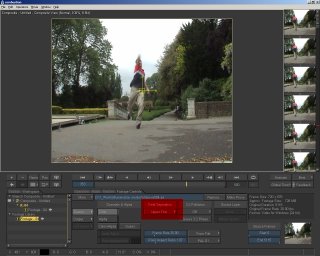 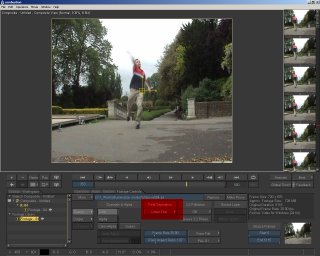 At first I thought that telling combustion to mix the fields, adding a bit of colour grading and some grain from a selected film stock would give my videos the film look, unfortunately this is not that easy.

How do you think Combustion is gonna give you your 25fps shot? I told you that the video was shot in 50 interlaced fields per seconds so the software will actually blend those 2 fields in a pretty disgusting manner. Look closely at the resulting effect: 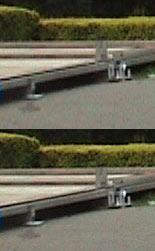 Contrary to what you could think, the top picture is the blend result and the bottom one is the original interlaced footage. Annoying isn’t it?

Yes the sad reality is that if you want to get a film look there is nothing better than shooting on film.

Have you got any idea how much it costs to shoot on film? I don’t either but I have been told it was very very very expensive. Any alternative?

Actually yes, shooting full frame! At the moment, only prosumer camcorder like the old Canon XL1 are able to do that. The full frame mode is also called Progressive.

Have you ever heard that term before? It is the new format for 1080 HD but don’t be fooled, the latest Sony HD consumer camcorder doesn’t shoot full frame. If you are interested in the amazing HD quality you will have to wait for the next generation of HD cameras so for the time being you will be stuck to Pal and NTSC. Too bad isn’t it? Yes that really pisses me off too!

Oh I almost forgot, if you only have a cheap camera, some people are suggesting to import your footage twice with an opacity of 75% on each footage but to give a different field order for each. My DV cam is so crap that it doesn’t actually make too much of a difference.

For video reference I don’t mix the fields. Keeping my footage intelaced allows me to have a better view of the motion arcs. Hehe you didn’t know that did you?

I hope this was usefull to you. Happy filming!

[edit] some AE plugins like Twixor throw away one of the fields and with a bit of magic create the missing field. That looks great but sadly create some blur since half of the information is missing.