As a follow up to my last post, here is an attempt at understanding timing by comparing animation timing to musical timing.

From the age of 7 to 15, I received an intense classical music training which allowed me to tell if a score was being played at 60, 120 or 180 bpm without much difficulty.

I am much older now but I realised that if I were able to do the same thing again, I would have a serious advantage compared to other animators. I am not one to keep stuff for myself so let me share with you a little secret. This might be a bit tedious to read but bear with me, this should be an invaluable little trick.

When you start learning music, the very first thing you have to get used to is to hit, one beat, two beats, three beats and four beats per second. “Sounds great but how can this help me Mister Fancy pants?”

Well the first thing you need to do is to train yourself to count one second. One easy way would be to look at at a clock and say “one thousand” everytime the big hand hits a second. After a while this will become a second nature.

Now, to divide that second in smaller chunks I have an other trick. You use a hand gesture going, up and down for 2 beats, down, right and up/left for 3 beats, and down, left, right, up/left for 4 beats.

– one beat per second is one beat every 24 frames

Here is a summary that you might want to print next to your computer screen.

With a bit of practice, just like Richard Williams, you will be able to go to the nearest park and see motion in animation beats. Go out, get some fresh air and experiement.

Have fun, hopefully this will help you too.

With all the screenings and all the people to meet, I found it really difficult to find the time to sketch but eventually forced myself to do it in the last days. 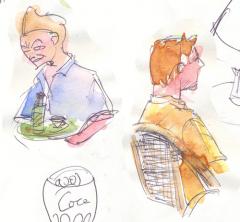 Sitting at the terrasse of a coffee shop, I thought it would be a great place to draw people walking in the street but as usual they walk too fast so I ended up sketching the people around us. 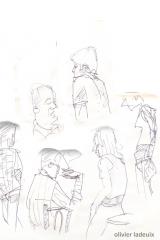 In a bar late at night 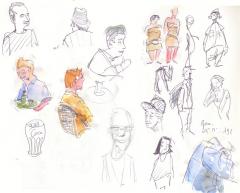 Terrase of a coffee shop. I had to draw those 2 girls in brown. Same outfit, different proportions.

View from the Café des Arts. I really struggle with colours but I still like to experiment. Sorry for the mess ;-) 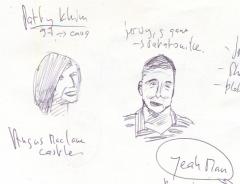 Pixar animators Patty Kihm and Ross Stevenson during a presentation of their work on Ratatouillle. “Yeah man” is the stamp of approval from Brad Bird when a shot is approved. 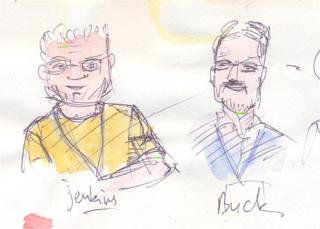 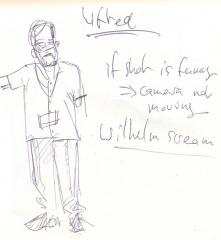 Gary Rydstrom during the presentation of the Pixar’s “Lifted”. Very nice animation, very nice rendering, but I didn’t like the character designs or the story. The human seem to be coming straight from Pixar generig, and the aliens just looked like blobs put together. The story is okayish. The audience seemed to like it but I found it a bit weak compared to the more subtle “Gery’s game” or “For the birds”. Actually, Blur’s “Gentlemen Duel” got an even crazier response from the audience compared to Lifted. 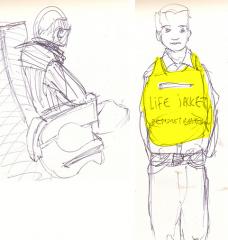 On the way back to London after the Customs confiscated the Reblochon cheese I intended to use for a nice tartiflette. Damn. 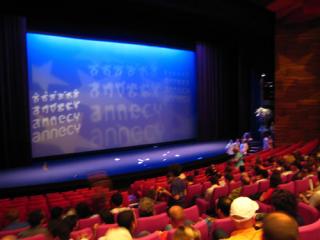 Main theatre but not the most comfortable. The festival reminded me why I prefer to watch DVDs from the comfort of my home, luckily some of the screenings took place at the multiplex cinema which is equipped with Sofa sized seats. 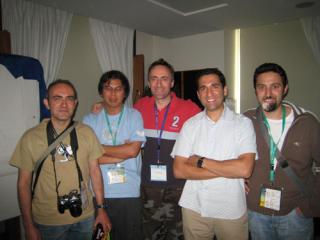 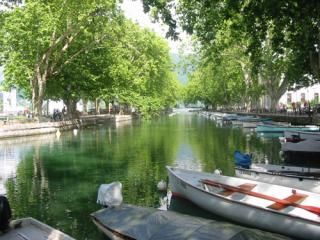 The canal that leads to the Annecy Lac 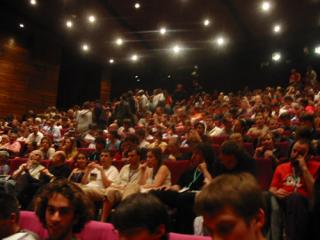 Main screen, behind us. 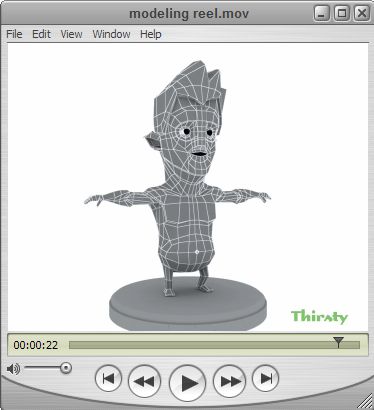