After few weeks working like a mad man. Class6 is finally coming to an end. Unfortunately I won’t be able to finish my short on time and will have to redo class 6 but it was a blast again and for this class I was privileged to have animator extraordinaire Jason Schleifer as a mentor..

For those who don’t know, Jason is an animation superstar who started his animation career at Weta and after few years at Dreamworks working on everything that was thrown at him ;-) he is currently a supervising animator on the sequel of my favourite Dreamworks show: “Madagascar 2” (Prince of Egypt and Eldorado are my second favourite).

He was really inspiring and having him for mentor for my short was a god send. He really helped me out in defining my character’s personality and without him I am not sure if my short would have been as strong. Obviously I am paying the consequences as well and some of the shots that were meant to last 4 seconds ended up well over 20 seconds ;-) anyway this will make my short even better and I don’t regret it at all! Instead of a 30seconds short I will end up around 2 minutes which is … perfect for festivals ;-)

caricature by the great Mark Behm 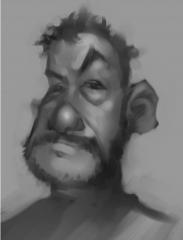