someone was asking about TV Paint on the AM forum so I decided to share my toolbar with everyone. The drawing underneath is based on someone’s blog.

Posted on March 9, 2009
Filed Under Animation | Leave a Comment

As you might have noticed, I have a fixation on Mike Mignola’s Hellboy character. I am not too sure it is because of Red’s skin colour or the very graphical design of the character and the toys or even the fact that I met Mignola at the Birmingham comic convention 2 years ago.

Anyway I found this great blog relating the production of the Hellboy TV serie. Have a look, it is pretty interesting. They talk about all the different aspects that go into the making of an outsourced Direct to DVD animated feature.

Communicating with the oversea studio

Colours, there was an other one on the choice of colours but I lost the link

“He has a gift” BrussHell 1st pass Spline

Here is where I am right now. Floatiness fun and ackward mouth shapes. Don’t worry it is all gonna be fixed in the next pass ;-)

I kind of took onboard some of the suggestions but the most noticeable change would be the framing. I was going through few DVDs this week end and realised the cutting the hands wasn’t too much of a big deal so here I am. I think the shot works better this way. We can focus a bit more on the face and the character takes more screen space.

Few people commented on the fact that I kind of go back to the same pose but I didn’t want the character to move too much on the screen so I don’t think I had much choice.

Some people wanted a progression which I would normally agree with but the audio doesn’t have that much contrast in the intensity so I d rather go for something much more contained.

Ah if someone knows how to do the breathing with Brussel/Bishop, please let me know. 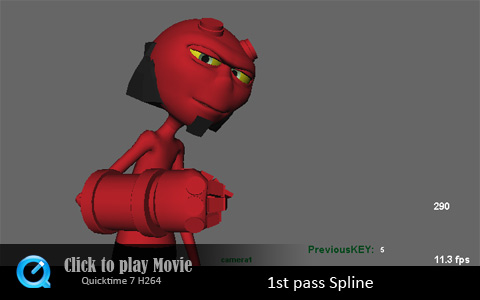 I feel it is time to bump up some of the cool links from my bookmarks: