I know I am very late with this but hey, I was really busy for the past few month you know and I still haven’t posted any pictures from CTN 2011! ;-)

Ianimate just released their first showreel. Some really nice work is being done there but what else would you expect from a school taught exclusively by Dreamworks animators! If I had to restart my animation schooling I wouldn’t know where to go between all the great schools available those days!

Big up to my AM fellow graduates Joost, Dave and Roberto for making it into the showreel. I recognized a lot of other familiar names!

Posted on December 20, 2011
Filed Under Education | Leave a Comment

I am not a fan of walks “on the spot” and in games I never had to make one but Kyle Balda’s workflow seems really effective. No step blocking here, he starts immediately in spline, which technique I am finding, a lot of very fast feature animator tend to favor. Rob Thompson gave us a similar demo at the Animation Collaborative and Rob was originally a 2d animator.

In the following video, Kyle Balda creates a basic walk cycle in 30 minutes! It is good to see how he handles the peel of the heel and the math expressions he uses in the graph editor. I didn’t know the ones he applies in the video but one I use extensively to troubleshoot gimbal locks is the +=360 or -=360

Italian in 10 minutes, the power of gestures

According to NLP, 55% of communication is made by gesture and body language. Watch this video and you will be amazed by how easily you understand Italian without any previous knowledge ;-)

Great reference for gestures or give personality to your characters.

Alfredo Cassano posted a nice series of illustrations on his blog. Make sure you see the three of them and maybe buy his book! 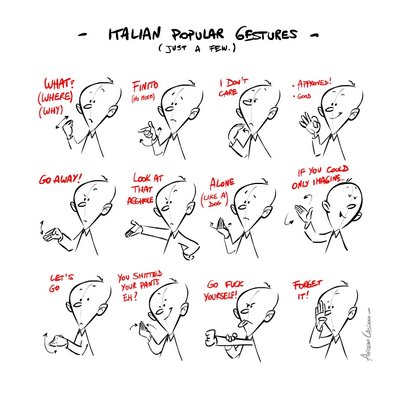 Ahah! Just when you thought you had seen enough trailers for Lorax, a new one pops out! Trailer 2, technically speaking is actually the third one but I am guessing they finally considered the first one a screw up since it was a bit confusing regarding who those male characters were.

Trailer 2 is not giving away a lot more and making things a lot clearer. The trees we thought were populating the streets of Thneedville are actually made of plastic!! Makes sense!

My buddy Ross Burt also wrote a review on his blog