MAndrews and the Google Doodle team

Great 58 mins interview with Brave’s Director Mark Andrews at the Google campus. Not your average, “how difficult was it to make Merida’s hair?” kind of questions fortunately.

There was also a tricky question at the very end regarding the Japanese trailer and I let you find out how he got out of it.

Few weeks ago, Karim my younger brother from an other mum and dad, reminded me that Mark Andrews (aka Mandrews) and Ted Mathot had been interviewed by Andrew Gordon for a great Story Splinecast back in 2007.

I had completely forgotten about that one and was surprised to see that I even left a blurb in the comment section ;-)

With the release of Brave which Mandrews directed, I HAD to listen to that interview again and I certainly had forgotten all the great gems it contained and how different Mandrews profile is compared to other Pixar directors. Well we didn’t know he would go on directing a Pixar movie in 2007 and I expected him to go on directing live action instead.

The little gem I wanted to shed light on today is the one where he talks about the “180 degree rule”. Some directors Mandrews worked with would never break it but others seem to be a bit more partial. Check it out

I would recommend you to listen to the entire Spline cast. 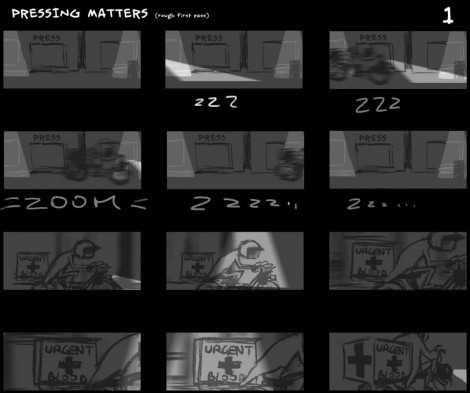